What are the most important requirements in EU university admissions?

Europe hosts 45 per cent of international students globally and the number of candidates choosing to study internationally has been on the rise. EU Member States and HEIs are implementing strategies to ensure they attract the best talent, including promotional activities, English language programmes, and housing and financial support.

The EMN Synthesis Report for the EMN Study 2018 makes for an interesting read on the subject of attracting and retaining international students in the EU.

Listed below are some of the key points highlighted in the report. You’ll find these, along with a few others, on page five. Admissions departments might be interested in reading Chapter Three: Attracting International Students, which explores successful approaches and provides examples of how different universities are boosting international admissions.

- Nearly 50 per cent of EU Member States have “attracting and retaining international students” as a policy priority (to varying degrees).

- The EU is becoming an increasingly popular destination for international travel- 460,000 first residence permits were issued for study reasons in the EU in 2017.

- In 2017 the most popular destinations were the UK, France and Germany; these countries issued about half of first residence permits for study in the EU.

- The largest number of international students came from China, the US and India to the EU. 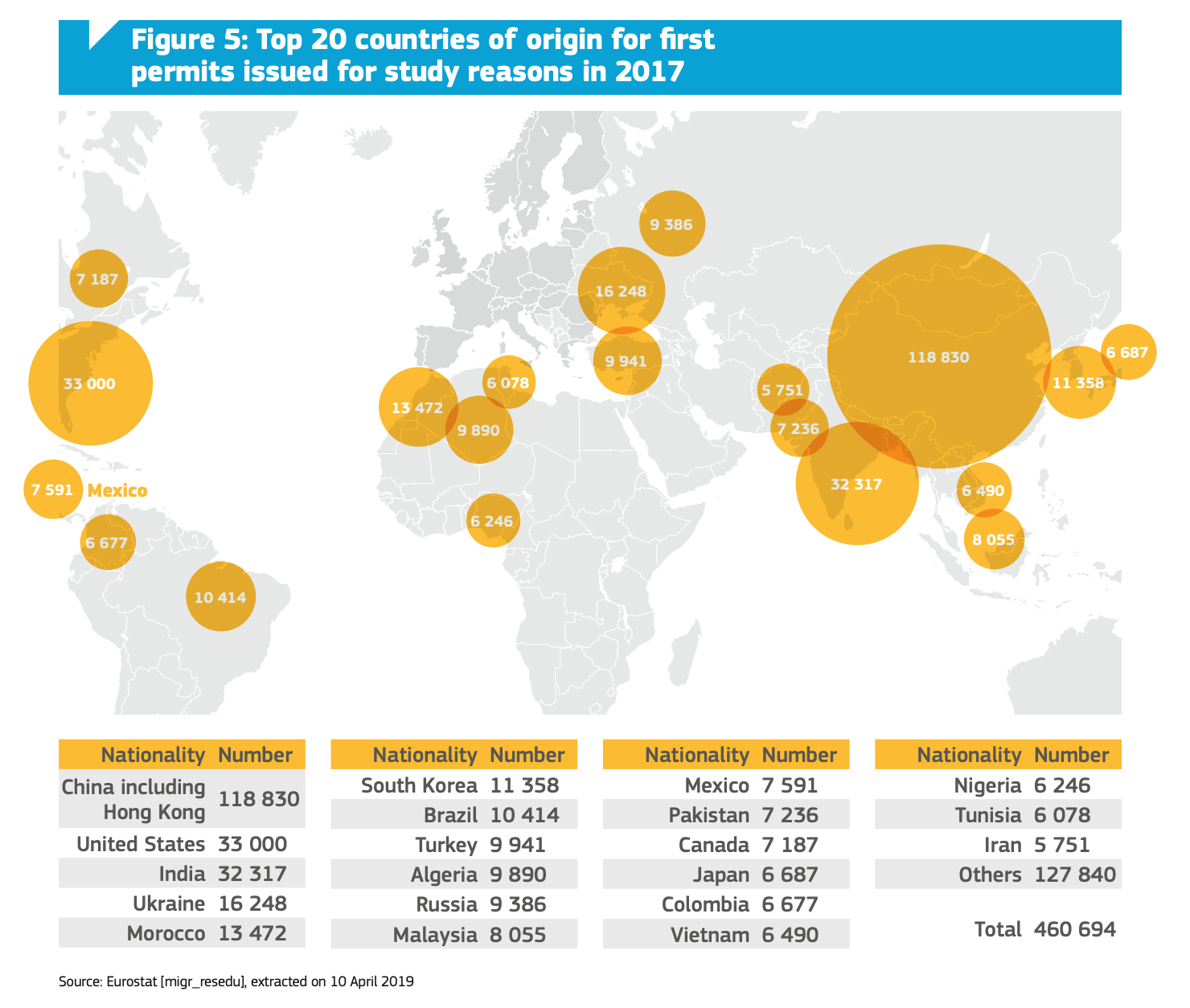 - Higher education institutions and governments carried out promotions and campaigns to attract international candidates and many worked together.

It’s interesting to note that some of the strategies that led to higher international student admissions didn’t affect student retention in the same way. For instance, English-taught programmes were effective in attracting students however had the potential to have a negative long-term impact on labour market integration (unless this was offset by country of study language lessons and other measures focusing on integration).

Of course, as the report was published in September 2019, it’s important to take note of what’s happened to the international landscape since then. An estimated 47 per cent fall in international student numbers will cost the university sector in the UK £1.5 billion, according to London Economics for the University and College Union (UCU).

“The main policy drivers for attracting and retaining international students included the internationalisation of HEIs and increasing financial revenue for the higher education sector, contributing to economic growth by increasing the national pool of qualified labour and addressing specific (skilled) labour shortages plus tackling demographic change.”

- Promotions and the sharing of key information, a key example being “Study in Lisbon” developed by Lisbon City Council. It’s designed to provide information and housing initiatives to international students who choose Lisbon as their city of study.

- Scholarships and initiatives like the Erasmus + programme highlight the EU as an attractive destination for study; EU nationals and citizens of other international partner countries continued to received support through the exchange programme.

- Financial incentives offered by HEIs included the reduction or elimination of tuition fees. For instance, the University of Vienna refunded 50 per cent of the tuition fees for students who demonstrated successful completion of 16 ECTS credits during the previous academic year.

- Offering programmes in the English language was also an effective way of attracting international students in all of the EU Member States. Some countries offered specific programmes in other languages, including German, French and Russian.

- Outside of the immediate academic sphere, “family reunification and support” was also highlighted as an effective strategy for international student admissions.

“The possibility for international students to bring their family members to a Member State may also help to make an opportunity to study more attractive. While the Student and Researchers Directive does not regulate family reunification for students, 17 Member States were found to provide access to family reunification for students to varying degrees.”

Institutions currently navigating their way through the 2020-21 academic year are being faced with unprecedented levels of uncertainty around international student admissions. Many universities are pivoting, while others are also experimenting with different approaches to see what works while trying their best to plan ahead.

Back in April 2020, we ran a webinar with six HEI professionals on the topic of how universities can overcome the challenges posed by Covid-19. Stephanie Villemagne, Associate Dean MiM and MiF at IE Business School spoke of how her institution has various international offices around the world, enabling the team to build communities locally until students can travel to the school’s main campus in Madrid.

Nobody can say what the situation will look like next year, but the fact remains that admissions teams across the globe will play an even more significant role when it comes to welcoming and forming proactive partnerships with international students.