How to choose advertising channels for Higher Education student recruitment

How can universities fine tune their digital advertising efforts to increase student enrollment and broaden brand awareness? We take a look at some of the most effective channels out there today.

In a content-rich and what sometimes feels like an overpopulated online sphere, it’s becoming increasingly difficult for universities to claim their piece of digital real estate. As such, HEI’s are pumping a significant amount of their marketing budget in paid student recruitment campaigns.

To put it into perspective, in 1995, universities spent £14m on advertising combined. Almost ten years later, in 2014, the University of Reading spent almost £169,000 on advertising alone (there are 130 universities operating in the UK at present). Organic methods and SEO, whilst beneficial to ranking and reach, simply won't suffice on their own.

By investing in the most appropriate digital advertising avenues for the industry, HEIs can compete with other universities, really speak to their target audience through personalised and targeted messages and flex their creative muscles in the process!

The most frequently used pay per click (PPC) channel is Google Adwords; it's more often than not the primary search engine platform for HE student recruitment campaigns. The sheer size of Google’s reach potential makes it a worthwhile marketing investment, and to avoid it would mean risking one’s position on the prestigious first page of results, even if SEO is strong.

Although comparatively costly (the more competitive the industry, the pricer keywords tend to be), Adwords can have outstanding conversion rates if managed well. With this in mind, universities should ensure their Adwords account is linked to Google Analytics to see the entire customer journey and to evaluate how many 'clickers' order a prospectus or sign up to a mailing list through the channel.

The search results for ‘MBA Berlin’ contain numerous ads on the first page. 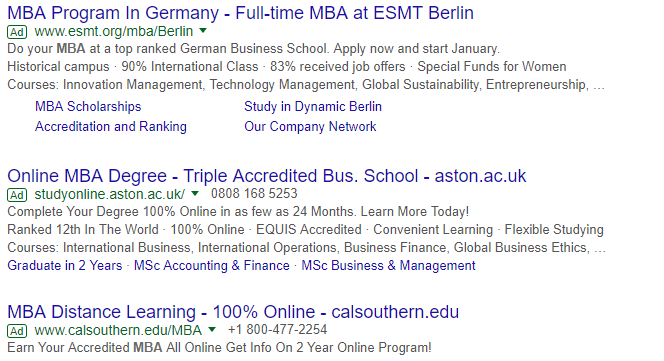 Bing - Microsoft’s search engine - is quite often overlooked by marketers. However, since the release of Windows 10, of which Bing is the default search engine, the platform has been growing gradually and could reach an even wider audience in the coming year.

HEIs looking to recruit students in China should focus their attention on Baidu, China’s leading search engine (Google is banned in the country). Baidu Tuiguang is the search engine’s advertising platform and offers many of the same features as Google Adwords and Bing Ads.

As an industry, higher education is skyrocketing on social media, with an estimated 77 per cent annual follower growth across all channels in 2016. Social media advertising has a proven track record of delivering ROI for businesses in the way of likes, engagement and website visits, and the same can be said for student recruitment.

The professional social media platform LinkedIn is a powerful advertising tool for the higher education sector. Universities can utilise the different ad formats to boost reach and they are particularly effective for promoting post-graduate vocational courses like the MBA.

In the following example, Utah State University optimised their display ad campaign by targeting users from specific geographic locations, as well as those with certain areas of expertise and career levels. The campaign was highly successful and 70 per cent of clicks resulted in requests for information. USU also utilised LinkedIn’s sponsored InMail feature to deliver their message directly to the targeted individual's inbox. 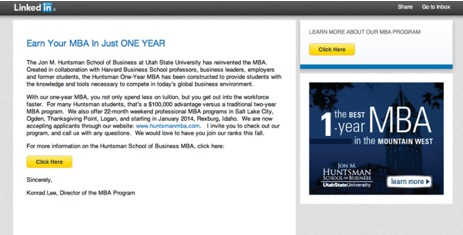 Facebook has retained its title of most popular social media platform in the world this year - on mobile as well as desktop - with over 2000 million active users and counting. 92 per cent of marketing professionals use Facebook advertising and for obvious reasons. The platform is full with data from its users, making the segmentation combinations plentiful.

As with LinkedIn, instead of creating ‘catch-all’ campaigns, universities can target their recruitment campaigns more precisely to include underrepresented cohorts and demographics. Some of the filters available on Facebook that might be useful for HEIs include age, level of education and generation.

Facebook ads provide the perfect opportunity for universities to look beyond clicks and conversions and actively engage in conversation with prospects who comment on ads.

“Facebook ads are firmly cemented as part of our digital strategy. The sophisticated tools allow us to efficiently and effectively reach the right people at the right time, while maintaining low costs and producing accurate reporting for continued optimisation and invaluable insight.”  - Sam McDonald, Marketing Executive, The Open University. 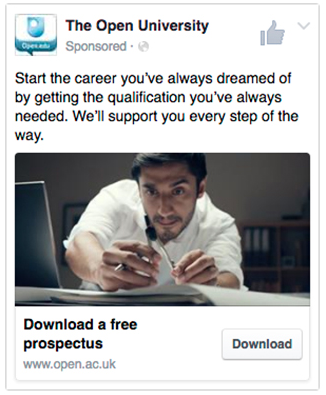 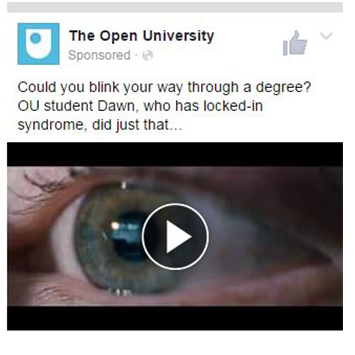 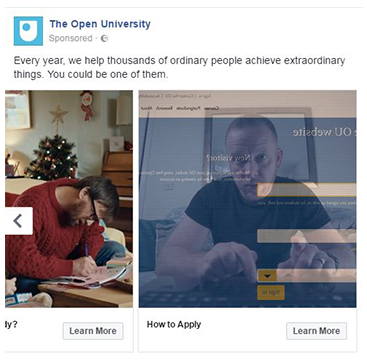 Evidence strongly suggests that in order to garner the attention of younger students, universities should seriously consider using the visual platforms Instagram and Snapchat if they aren’t doing so already. A recent study by NORC at the University of Chicago found that in the US, these apps are teenagers’ most favoured channels, with 76% using Instagram and 75% using Snapchat.

The latter is one of the fasted growing channels and there are many ways in which you can advertise on it. In terms of budget and relevancy, Geofilters is a great choice. Geofilters allow users to acquire the filter when they are in a specific location at a particular time, for example during an event, or in the context of a HEI, fresher’s week, graduation, or for prospects, an open day.

Another Snapchat option is Snap Ads; 10 second videos that appear periodically between features on the Discover tab that give the user the option to ‘swipe up’ to access more content. Adverts on Discover, whilst significantly more expensive, reach most of the app's users and features trending stories, viral topics and event coverage - again, great for promoting the university by illustrating what life is like on campus.

To maintain its stylish visual aesthetic, Instagram’s sponsored posts are more minimalistic are therefore effective for branding; they tend to be subtle and less ‘hard sell’.  They blend in with the other content and compliment the feed. Instagram ads operate on a cost per click (CPC) basis, allowing the user to set their own budget.

Is your university leading a successful advertising campaign for student recruitment? Tell us on Twitter @fullfabric!