Our team members Reet and Rob attended the world-leading education conference last week. Read on for quotes from their favourite talks and other highlights from the four-day event.

Abdul Chohan: Why innovation is for the whole school

Abdul Chohan kicked off the first of Bett’s four days in energetic fashion. The charismatic speaker is Director of Development at Bolton’s Essa Academy and provided examples of ways his school uses technology to enhance learning.

He noted that “consistent and technology doesn't always go together" and spoke engagingly about the industry’s reluctance to change: "we've always done it that way are the six most expensive words in education." 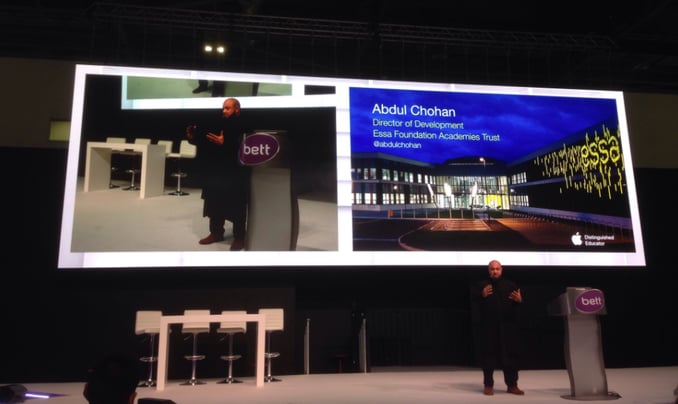 James Massey: Getting girls to code

James Massey of Discovery Education gave an impassioned talk about what educators must do to encourage female students to learn how to code. As he pointed out, women make up less than one-fifth of the UK’s ICT workforce. He recommended that teachers focus on the skills rather than the coding itself and provide examples of people to look up to.

"Give them positive role models, like Ada Lovelace and Margaret Hamilton." @jmass100 on how to engage girls in #coding at #Bett2017 #STEAM

The Edtech Podcast Live: Sticking up for the ARTS in STEAM

The panel agreed that educators must find ways to make the abstract subjects studied in STEM subjects more tangible for students. Wade commented: "if we focus on solving local and global problems, that will include a lot of people."

The panel also covered very interesting ground when discussing the narrow representation of STEM professionals in the media.

On representation of STEAM: "How amazing would it be if Eastenders had a coder, engineer or mathematician?" @podcastedtech #bett2017

Sir Ken’s influence was strongly apparent at Bett with several speakers referencing his work before he took to the packed Bett Arena on Friday afternoon.

Robinson began by discussing the human instinct to learn. He noted: "Kids are born as a thriving bundle of opportunity. They love to learn." He went on to explain how education systems fail to capitalise on this natural passion: "the education system is built on a narrow view of academic ability."

What an inspiring way to end our three days at #Bett2017. Thanks, Sir Ken #edchat pic.twitter.com/SEMkgikAhq

During a rousing conclusion, Robinson argued that if we could build our schools again from the ground up, they’d probably look nothing like our current schools. He then underlined that the bond between student and teacher is the foundation of any good learning environment: "you can do without everything else if you have a great relationship between teachers and learners."

Reet’s favourite talk: what can universities do to attract gen Z? by Minttwist

Colin Cheng delivered a captivating presentation on what universities can do to attract generation Z. Colin works for Minttwist, a digital agency specialising in higher education, and he highlighted work the agency had completed for University of London.

The session included some jaw-dropping statistics on search behaviour among 16-to-24-year-olds. Examples include:

This trend will undoubtedly have an impact on student rectruitment in 2017 and beyond.

Over at Bett Futures, I met the founders of MeeTwo. This new chat app allows teenagers to post anonymously about things they may find difficult to discuss with a friend, teacher or parent.

Mind Moose is another edtech startup which assists students with their mental health. The in-browser experience is designed to develop young children’s problem-solving skills, help them discover their individual character strengths and teach them how to manage their emotions.

Elsewhere, it was great to receive a demo of KANO, the computer which anyone can assemble, regardless of age or prior technical knowledge. I enjoyed a visit to TheIdeasBus, a gleaming American-style school bus which takes edtech products to schools across the UK. And, as always, it was a pleasure catching up with our Danish friends from KUBO and Peergrade.

Visiting the @TheIdeasBus at #Bett2017. A converted school bus which takes innovative #edtech products directly to schools across the UK pic.twitter.com/YYZkXJNSok

What were your highlights at Bett? Let us know by leaving a comment or tweeting us.