Last year AMBA’s proprietary research centre published their MBA Application and Enrolment Report 2018. The report explores trends in the MBA market at a time of global economic uncertainty. The insights are based on the findings from the 2017 calendar year.  Interestingly, AMBA found that the way in which people are studying and the mode of learning being adopted by business schools around the world is changing. This change can be attributed to people’s need for flexibility when it comes to postgraduate study, especially in an uncertain economic climate.

If you’re looking to gain further insight into the landscape of MBAs and their place in the world today, The Association of MBAs (AMBA) is a great place to start.

This professional membership association and accreditation service has been committed to promoting and improving the MBA experience since they were founded back in 1967.  AMBA’s experience and impartiality makes them a reliable thought leader in the industry.

AMBA currently accredits programmes from the top 2% of business schools in over 70 countries worldwide and works closely with corporate business partners to pave the way for innovation and improvement.

Last year AMBA’s proprietary research centre published their MBA Application and Enrolment Report 2018. The report explores trends in the MBA market at a time of global economic uncertainty. The insights are based on the findings from the 2017 calendar year.

The report raises some interesting points for discussion, particularly around mode of learning and application conversion rates. In this article we’ve summarised some of the report’s key the findings and what we find to be the most interesting revelations.

You can read the report in full here.

The graphic below (pulled directly from the report) shows the proportion of business schools who participated in the study in each region across the globe.

(All images credited to AMBA)

Interestingly, AMBA found that the way in which people are studying and the mode of learning being adopted by business schools around the world is changing. This change can be attributed to people’s need for flexibility when it comes to postgraduate study, especially in an uncertain economic climate.

There was a noticeable shift away from full time to more modular-based study.

57% of programmes were part time, 22% were full time and 21% were conducted in a modular format (up 4 percentage points from the previous year).

When looking at modes of learning (whether the programme was classroom, online or blended), AMBA found that, unsurprisingly, a classroom-based approach remains the most prevalent, although this method is down five percentage points from the previous year.

82% of the programmes surveyed were taught in classrooms, 3% were delivered online and 16% embraced a blended approach.

“Blended delivery appears to have become more available, given its proportion has increased by six percentage points (from 10% in 2016).”

The report digs deeper into the modes of learning adopted in different parts of the world. For instance, the blended approach is more popular in programmes taught in Asia and the Middle East than anywhere else, followed by Europe and North America & Caribbean. 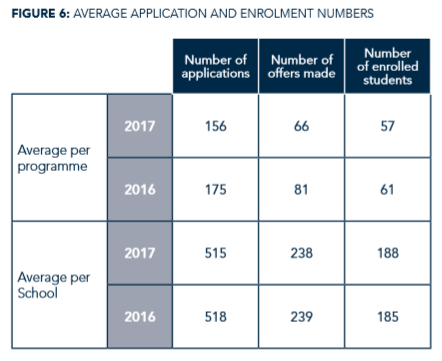 The study found that the average number of applications per programme fell from 175 to 156 between 2016 and 2017 as did the number of enrolments and offers made, as the table above shows.

Although the discrepancy might seem quite vast, the trend can, at least in part, be attributed to an increase in the the average number of programmes available.

“Since there was growth in the average number of programmes offered across the globe, it is most useful to view these changes at a School level if they are to act as a measure of understanding the demand and supply of MBA programmes.”

Section 5 of the report looks at the landscape of applications and enrolments in relation to where programmes are taught.

Findings show that the share of programme applications for each region in which a programme is taught tends to match the share according to where an institution has its headquarters.

“This means that 5,945 applications for UK institutions are being made to programmes delivered outside that region. This is reflected in the international composition of applicants of these schools from outside the UK (79%).”

AMBA also studied application to conversional rates in global locations. As the image below illustrates, the highest conversion rates were in Latin America and the lowest were in North America & Caribbean.

“Overall, this conversion rate has increased slightly since 2016, from 36% to 37%. This may in part be due to the slightly lower level of applications received at School level.” 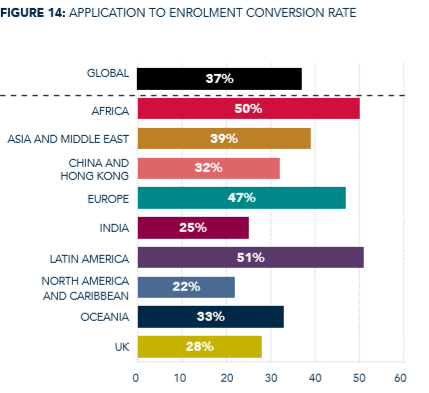 When it comes to representation by gender, the percentage of women who applied and enrolled onto an AMBA accredited business programme has risen. In 2013, 33% of prospective MBA students were female, and in 2017 the figure stood at 38% (enrolment went from 32% to 36%).

As the chart below shows, progress is being made, but there is still a long way to go to close the gender gap in MBA study. 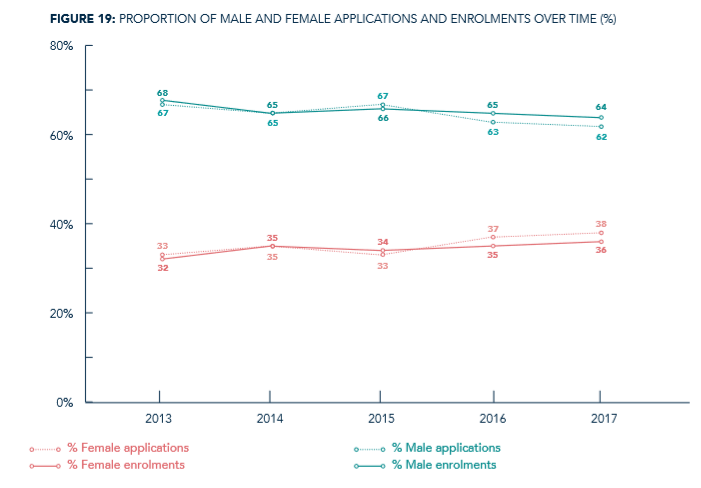 Is your business school looking to cut through the competition and nurture more applicants through to enrolment? FULL FABRIC’s technology could help you do just that. Streamline the admissions process and attract more candidates with our Origin solution.